St Helen’s School opened in 1899 under the control of Sister Aloysia. The School was built for Catholic children in the Southend area and its mentor was the Revd P. McKenna of Our Lady and St Helen’s Roman Catholic Church, Westcliff-on-Sea. It was he who initiated the St Helen’s School Fund and appealed to parishioners for subscriptions and donations.

In the next few years the school outgrew its original buildings. Four new classrooms were opened in January 1928.

The school was closed from July 1939 until January 1940 during which time the teachers initiated a system of Group Teaching centres in pupils’ homes. As many children as possible were evacuated from Southend and the pupils of St Helen’s school were accommodated at Mansfield, Nottinghamshire, from 1940 to 1943. The school moved back to Southend in 1943.

The next period of building began in 1973/4 and the school was moved from its position beside Our Lady and St Helen’s Church to its present site in North Road.

In January 1982 the main hall was seriously damaged by fire and many of the school records were destroyed. 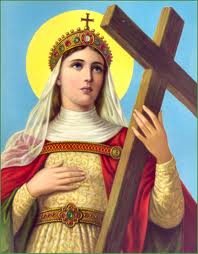 St. Helen was born at Drepanum in Bithynia, possibly by an innkeeper’s daughter. Somewhere around 270, the Roman general Constantius Chlorus met her and, in spite of her humble birth, married her. When Constantius was made Caesar, he was persuaded to divorce her and marry Theodora, the step-daughter of the Emperor Maximillian. Some years earlier Helen had given birth to a son, Constantine, who had a deep regard and affection for his mother.

In about 312, St. Helen became a Christian. She made use of the treasures of the empire by giving money to the poor, cared for the indigent and distressed and built numerous churches. After the victory in Licinius in 324,Constantinebecame master of the East. At this time St. Helen went toPalestineto venerate the places made sacred by the bodily presence of our Lord. After Golgotha and the holy sepulchre had been laid bare by the removal of the terrace andtempleofVenuswith which the Emperor Hadrian had over-built them, Constantine wrote to St. Marcarius, Bishop of Jerusalem, ordering a church to be built.

St. Helen took the task on herself to see this work executed, desiring at the same time to discover the sacred cross on which our Redeemer died. The finding of three crosses in a rock-cistern just to the east ofCalvaryis celebrated on May 3. The story of her finding the cross is the subject of Cynewulf’s finest poem, Elene. Cynewulf is one of only four Anglo-Saxon poets from the 9th century whose work is known today.

The feast of St. Helen is celebrated annually on August 18th.

On January 21st 1982 there was a fire at St Helen’s school. The hall was badly damaged and classrooms were unusable due to smoke damage. Everyone was sad and felt that there was no hope.

The staff and parents of St Helen’s came in to clean the school so that the children could return. A crucifix, which was presented to the school at the Mass of Dedication, hung on the wall and everybody thought that it would have been destroyed by the flames. However, it was as good as new and when they removed the crucifix, they found a cross shape had marked the wall – a reminder that Jesus was with them.

The builders were asked to cut round this piece of plaster to leave the smoky cross intact. This was encased in a frame and the crucifix was hung next to it, both can be seen in our hall today.